Chinese adage: “Not only can water float a boat, it can sink it also.”

Mahatma Gandhi gives us this sobering dictum: “There is sufficiency in the world for man’s need, not for man’s greed.”

So what happens in modern day when water is threatening our boat? Many times, we end up having to deal with greedy towing companies. The stories of salvage nightmare claims by unscrupulous modern day legalized pirates in the guise of towing companies give Florida a very bad name.

In contrast to being governed by our land based law, which does not grant a volunteer who preserves or saves property the right to compensation, the salvor of imperiled property on navigable waters is entitled to a reward, and many times a breathtakingly big reward.

Fail to follow this rule at your peril: Don’t let them put a line on you, and don’t sign anything! However, usually someone comes to us after one or both have happened, and we can help.

First, though, here is a summary of the law which has driven you to search for our services.

“Salvage” is the name of the claim brought in federal court for services voluntarily rendered to a boat that was subject to a marine peril. The reward due a salvor creates a maritime lien on the salved property based on the vessel’s value and the extent of peril, the extent usually being defined in the salvor’s favor. The salvor may sue both the owner of the property and the vessel under appropriate circumstances. The salvor, in a pure salvage claim, must prove:

This is known as “no cure, no pay” salvage. In a pure salvage situation, the reward to the salvor is calculated by the court by looking at various elements: 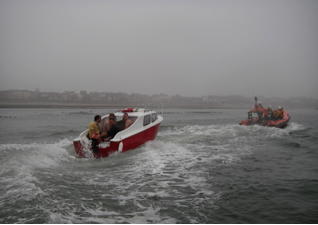 Unlike pure salvage, contract salvage involves a salvor who acts to save maritime property after entering into an agreement to tow or salve. The principles of salvage and towage law are distinct. Salvage merits an equitable award, while towage is compensated at a contract rate.

Many of you have contracts or “memberships” with towing companies. These are tricky and not necessarily written in your favor. When the opportunity presents itself, a towing company will claim that the situation is beyond normal towing, and will try to claim the much higher salvage amount. We have litigated these cases before, and we know your rights. We can help in the face of a big ticket item claimed.

Peter Commette and his staff at Peter M. Commette, P.A. know how to protect your rights, and we have the skill to do so. We understand your dismay at the position in which you find yourself, and we delight in turning the law on the towing company or individual whose greed is resulting in a devastating claim for reward, so disproportionate to the real peril of the water you faced or the services rendered. Contact us. The initial consultation is free.

In the meantime, if you would like to learn more about the subject, here are links to two articles explaining towing and salvage claims: